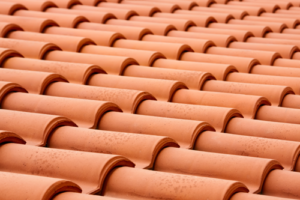 Clay tile roofing origins can be traced back to China,  10,000 B.C.; and the Middle East, a short time later. The use of clay tile roofing than spread throughout Asia and Europe. Not only the ancient Egyptians and Babylonians, but also the Greeks and Romans roofed their buildings with various formations of clay tiles. Ultimately, European settlers brought clay tile roofing  to America where it was established in many places by the 17th century.

The Dutch settlers on the east coast first imported clay roofing tiles from Holland. By 1650, the Dutch had established their own full-scale production of clay roofing tiles in the upper Hudson River Valley.  Several clay tile manufacturing operations were in business around the time of the American Revolution, offering both colored and glazed tile and unglazed natural terra-cotta tile in the New York City area, New Jersey and Pennsylvania.

Specimens of clay roofing tiles from the 1585 settlement of Roanoke Island in North Carolina have been identified by archeologists. Clay tile was also used in the early English settlements in Jamestown, Virginia, and St. Mary’s in Maryland. Additionally, clay tile roofing was also used settlement of St. Augustine in Florida, and by both the French and Spanish in Louisiana.

The most significant factor in popularizing clay roofing tiles during the Colonial period in America was the concern with fire and the establishment of building and fire codes in New York and Boston areas. These fire codes, which remained in effect for almost two centuries, encouraged the use of clay tile for roofs, especially in urban areas and government buildings. Clay roofing tile was also preferred because of its durability, ease of maintenance, and lack of thermal conductivity. 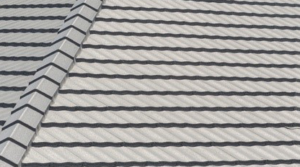 Concrete roof tile was introduced in Germany during the early 1800’s when a German farmer made flat thin slabs from portland cement concrete and used them as roof tiles for a barn. Additionally, he had built up a small side business making tiles for his neighbors. The new product did not prosper for long as it competed with a well established clay tile and slate industry.

Concrete roofing tiles were introduced to America in the early years of the 19th century. Like the European clay tiles, concrete was mixed and poured into metal or wooden molds and allowed to harden.

The production of concrete tile is now an exact science. Gone are the days when the sand used was judged as “slot” or “sharp”. Currently, the sand is graded and tested by certified laboratories . No longer does a tiler stand on a tile to test its strength. Instead, tiles are tested with the highest of standards. The colors used are no longer “pigments” but metallic oxides, which are both natural and synthetic. The tile itself is no longer pressed, but extruded, eliminating the laminations which resulted from pressing. Speak with a CB Specialty Roofs Representative for more information on Tile roofing.